Microsoft is formally making it's pitch to sustain and continue to hold the commendable position in the world of operating systems. In this efforts MS has recently announced it's revolutionized, most discussed, and would be most debatable Metro UI for windows 8 operating system.
Just a day or two before this article was published, Microsoft has been granted patent for it's "Metro UI" from US patent and trademark office, and this patent was filed under the name 'Visual motion for user interface feedback'.
What made Microsoft to invent "Metro UI" ?
Windows 8 derived this idea of  Metro UI from it's most popular "Windows phone 7" UI. As Microsoft burnt its figures with windows CE phones, since these phones failed to cater to user expectations in many areas, Microsoft really had to bring in radical changes and innovative features into its next generation of phones to stay in the competition and live up it's reputation. "Metro UI " is one of the biggest change that the designers at Microsoft stressed for.
Why is it even called "Metro UI" ?

There is an interesting story behind this. The designers at Microsoft were working hard to find out what makes humans to perceive  things quickly and easily. and  as research went on they found  that people showed capabilities to perceive Sign board, Warning boards, Information board displayed at Metro stations and many other public place.
Microsoft decided to milk out this idea, and redesigned windows phone UI as sign boards displayed at metro stations and named it as "Metro UI"
A sneak peek of Windows 8 Metro UI ...
Microsoft has re-engineered it's conventional desktop UI to bring in home screen concept in windows-8. This is a significant change when compared to all old versions of windows UI, however this Metro UI may doesn't seem to be a big change for windows phone 7 users as windows 8 UI is inline with windows phone 7 UI. Now Microsoft has decided to introduce this unique UI across all gadgets like Phones, Tabs, Desktops, Laptops etc..
As most of you all might be knowing Microsoft is expected to release windows 8 during Fall 2012, though beta releases are made available for selected OEMs there has been no official beta builds available for public . But few companies and geeks (rainmeter and omnino) are successful in emulating windows 8 metro UI on windows 7  and below are the few glimpses. 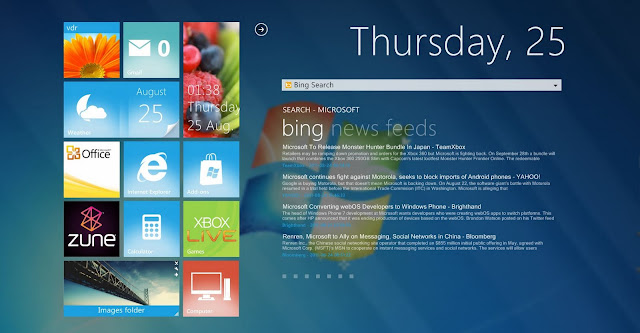 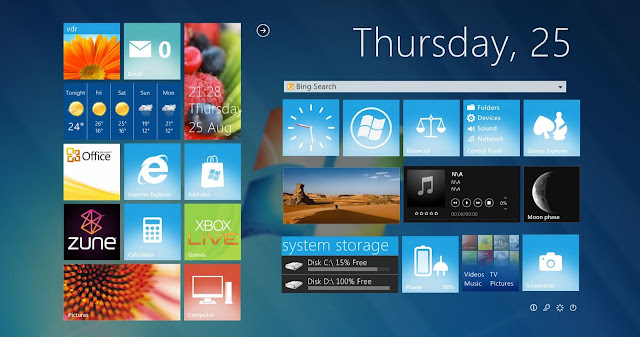 Other Significant Changes :
Most of us are hooked to a fact that "Seeing is believing" ,and from all the specs that Microsoft has made available for public, I'm sure that MS will emerge as a winner with this innovative UI. As Bill Gates always said "Passion and Innovation" are the key factor driving their business, and it looks this apatite for innovation has paid off.
After all we need "Change".. So looking forward to you Windows 8 :-)
Posted by Vijay at 9:58 AM