How Well You Know About Mobile Sensors ?

Gone are those days, when people were using mobile devices only for calling and messaging purposes. The new era of technical innovations has carried these devices all the way from " Feature Phones " to " Smart Phones ".
With advancements in chipsets, sensor, and computing technologies we can change the way we interact virtually with physical world around us. Each minute data associated with every minute of our life is now modelled into living information and which is deployed by integrating this data with our day today life envisioning a most secured and comfortable living of mankind.
All the augmented reality solutions existing today wouldn't have been possible if mobile devices were just a piece of hardware without any sensors. These sensors are basically Micro-Electro-Mechanical-Systems abbreviated as MEMS.

So, let's get to know about the most common sensors available on smart phones of these days, and also their applications. 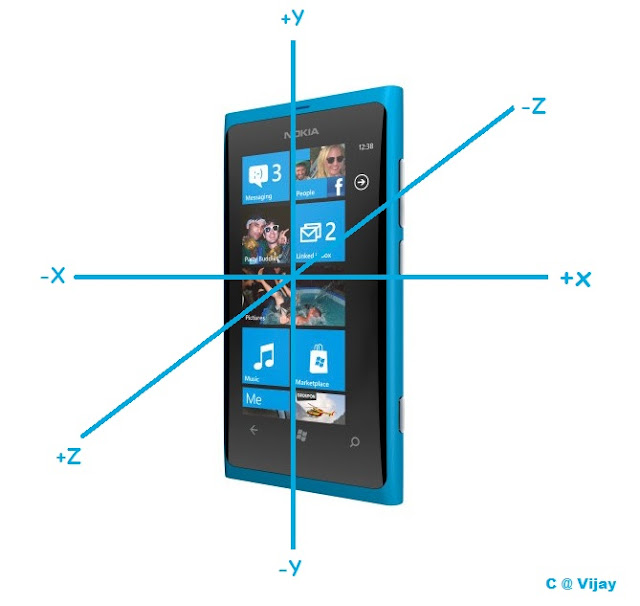 These sensors are used in mobile devices to regulate the amount of display brightness. This regulation is achieved through measuring the intensity of light falling on sensor.
Usability :
Under normal working conditions, lower the intensity of light falling on the screen, lower is the brightness of the screen and higher the intensity of light, higher is the display brightness.
This helps user to have consistent visual perception under all lighting conditions.
Accelerometer Sensor :
Accelerometer measures the linear acceleration due to gravity along all the three orthogonal axes X, Y, Z based on movement of phone. To be put in simple terms , if you are tilting your phone in some direction, accelerometer will tell you in which direction the mobile is being tilted and by what amount.
Usability :
On handheld devices accelerometers are basically used for gaming, like racing games, basket ball etc..
And it is also used for utility applications like health monitoring apps, bubble leveling etc.
Compass Sensor :
Compass sensor basically works like a normal prismatic compass which precisely points towards four cardinal directions, North, South, East, and West.
Usability :
These sensors are specifically used for maps applications to assist in navigation. Also compass sensors are used in utility applications like a compass app.
Orientation  Sensor :
Orientation sensor reflects the orientation in which the device is held. This orientation shouldn't be confused with the landscape and portrait modes of the UI.
The orientation values indicate whether the device is held in Top up, Top Down, Left up, Right up, Face up, Face down positions.
Usability :
As like accelerometer , orientation sensor is also used for gaming and in utility applications.
Gyroscope :
Gyroscope measures the angular velocity of the rotation of device in all the three orthogonal axes in units of degrees per second.
Usability :
Gaming and Utility applications.

Proximity Sensor :
As the name itself describes, proximity sensor indicates the proximity of the nearby objects around the device, this is achieved by emitting a beam of electromagnetic radiation and measuring the single strength returned.
Usability :
Gaming and Utility applications.

Tap Sensor :
Tap sensor reads the direction in which tap event is triggered along three orthogonal axes. The tap event is read as a tap, followed by a drag event along an axes.
Usability :
Gaming, the well known game Fruit Ninja mainly uses this sensor.


There still exists a few more less significant sensors like rotation sensor, magnetometer etc.. and the story doesn't just end here, with the success of Android, and iOS thousands of research projects are being carried-out parallelly all around the world, people are working around the clock , chasing their dreams, destined to build the world of future.
Posted by Vijay at 4:46 AM